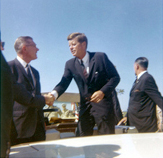 The construction of the dam was such a major event that it was dedicated by then President John F. Kennedy in his last public ceremony before his untimely death in Dallas. Kennedy was the first and only president ever to visit Cleburne County. The lake filled, spreading its far-reaching fingers throughout Cleburne and Van Buren Counties. The lake covers 40,000 acres and maintains a normal pool of 461 feet… now known far and wide as excellent places for fishing and water sports. 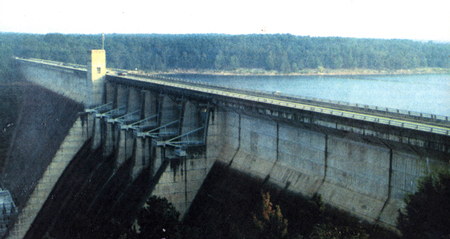 After the dedication of Greers Ferry Dam in 1963, many people came to the newly formed Greers Ferry Lake on weekends and wanted a place to worship. Among them were the coffee drinkers: Oscar and Frances Nixon, Cy and Martha Bond, and Nadine Ball, who longed for a Methodist curch near their weekend homes.

Cy Bond discovered through courthouse records that the Methodist Conference owned land in Higden. Some 80 years prior, there had been a church on this property. With the proceeds from the sale of the site that had been confiscated by the Corps of Engineers that had been flooded by the rising lake, a trailer was purchased in September 1964, and located on land next to the old post office in Higden.

Due to menacing flooding in the area, people had discussed building a dam for 30 years to control the water levels. After many years of planning, work on the dam began in 1959 when hundreds of work crews came and made their homes in the vicinity.

Many towns including stores, homes, farms, sawmills, schools, the Missouri-Arkansas Railroad Depot, and suspension bridge and/or foundations of many structures are under water due to this endeavor.

Following the completion of the dam, new towns flourished around the lake’s shore. Because of the beautiful lake, many people were drawn into the area for recreational opportunities. The weekenders wanted a place to worship; therefore, the Holiday Hills Methodist Church was established in Greers Ferry.

Each summer, thousands of people head to Greers

Ferry Lake in the foothills of the Ozark Mountains to frolic in the waters and camp by its shores. Since it was formed by the damming of the Little Red River in the early 1960’s, it has become one of the state’s top tourist destinations. In this issue, Rural Arkansas takes a look back in time to the dedication of the Greers Ferry Dam in October 1963. President John F. Kennedy spoke at the dedication, which was attended by about 10,000 people. It was a momentous occasion for the state. It was one of his last public appearances before his assassination, only a month later. 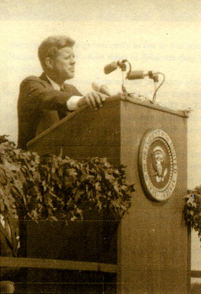 Fifty thousand Arkansans welcomed President Kennedy to the state Oct. 3 for the dedication of the $50-million Greers Ferry Dam near Heber Springs and a later address at the Arkansas Livestock Show in Little Rock.

The President praised the Arkansas congressional delegation, all of whom flew from Washington with him for the ceremonies, for their work in behalf of resources conservation and power development such as the huge concrete structure on the Little Red River which Mr. Kennedy formally dedicated.

For Arkansas, it appeared the timing of the President’s visit couldn’t have been better. It came at the peak of a conservative attack on river projects as “pork barrel” waste. Washington observers later said the Arkansas River Basin development, which envisions a navigation channel from Tulsa to the Gulf (via the Arkansas Valley) along with flood control and hydro-electric projects, faced more favorable future in the wake of the President’s visit. First actual work on the program which might have been stopped Nov. 1 will continue until Jan. 1 when a Senate-House logjam may be broken to free the way for future construction funds. Secondly, it was said that the whole Arkansas Development program is assured of sympathetic presidential consideration when the time comes to draft next year’s federal budget.

Such serious considerations didn’t seem to enter the minds of the thousands who greeted Mr. Kennedy during his Arkansas appearances. They listened to the President with some enthusiasm, they crowded around to shake the presidential hand, and there were no unpleasant incidents to mar the Kennedy visit.

There were some 3,500 at the Little Rock Air Force Base to welcome the presidential party; there was a crowd of about 10,000 at Greers Ferry Dam and there were an estimated 40,000 at the Arkansas Livestock Show grounds.

Speaking of the Greers Ferry Dam, President Kennedy declared:
“These projects produced wealth, they bring industry, they bring jobs, and the wealth they bring also brings wealth to other sections of the United States. this state had about 200,000 automobiles in 1929. It has a million cars now. They weren’t built in this state. They were built in Detroit. As this state’s income rises, so does the income of Michigan. As the income of Michigan rises, so does that of the United States.”

“Therefore I take pride in coming here today. I know that 10 years from now, if we come back again, flying as we did over the land, that we will see even a richer state…”